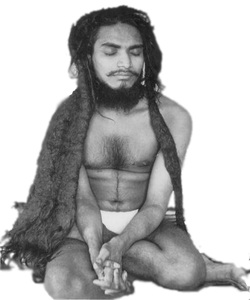 _Sri Sri Sri Shivabalayogi Maharaj was born to a poor but respected family of weavers in the south Indian village of Adivarapupeta on January 24, 1935, and was given the name of Satyaraju. For thousands of years, this part of India had been steeped in the lore and spiritual practices devoted to Lord Shiva.

While possessed of a dynamic personality, Satyaraju gave no sign of his future destiny until he was 14, when Lord Shiva himself appeared to the boy in the form of an imposing seven-foot ascetic. The Lord brought the boy into the state of samadhi (God-consciousness) by a mere touch of his finger to the spot between his eyebrows known in yoga as the brikhuti.

This event marked the beginning of an intense spiritual discipline called tapas, where the bala yogi (boy yogi) meditated in samadhi for 23 hours a day for eight years, mastering the powers of the four directions, then 12 hours a day for four more years. Throughout his tapas, there were periods when he stayed in samadhi continuously for months at a time. His practice was brutally hard on his body, including the time a neighboring boy threw a burning kerosene rag on him and another when he was bitten by a cobra. Fortunately, he was given healing treatments known as kaya kalpa by another famous yogi who recognized the boy as a reincarnation of his own guru from ages past. This yogi was Tapaswiji Maharaj, who understood that the boy was one of India's great souls who had come to earth many times in the past to guide and save humanity.

Upon completion of the 12-year tapas, Sri Shivabalayogi, as he was now called, was visited by his divine guru with his consort, Parvati, the Divine Mother. Lord Shiva announced that the tapas had been successful and that the young yogi was now free to do as he pleased. Sri Shivabalayogi replied that he had no particular desire, and that because his guru had put him into tapas, he should now tell him what to do.

Thus began the worldwide mission of Sri Shivabalayogi. From 1963 onward he traveled throughout India, founding many ashrams and conferring his initiation and blessings on millions of people. In 1987, he came to the West, paying several visits over the next several years to Europe and the United States. During these visits, he bestowed the gift of yogic meditation, also called dhyan, on thousands.
Contribute to The Shri Shivabalayogi Maharaj Charitable Trust
﻿﻿© 2023 The Shri Shivabalayogi Maharaj Charitable Trust﻿﻿